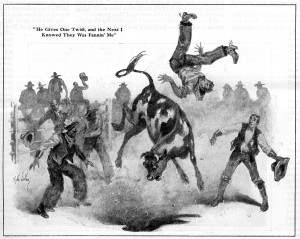 Tales of Corbett, the Belgrade Bull, are the stuff of a legend that has lasted more than a hundred years. There are still old timers around who can tell “the true story” just the way their grandfathers told it to them. Of course, “the true story” varies depending on such things as whether grandpa lived in Belgrade or Townsend, or whether his last name was “Teeples” or “Ross.” But community pride and family stories are probably what keep the legend alive.

To read the story beginning with Part 1, click here.

In 1949—more then 50 years after Corbett retired to be a herd sire in Indiana—the Townsend Star printed obituary that claimed the old cowboy named Jake Ross had ridden the Belgrade Bull. The Belgrade Journal reprinted the obituary setting off flurry of letters to the editor. Most of them described a midnight ride Ross made in Belgrade. Nobody explained the motives behind the ride, but probably it was for the same reason others had purloined Corbett—to try him out before placing a bet.

Jake and a friend found the bull in Belgrade and took him to a flat near a gravel pit. They saddled him and Jake climbed aboard hanging on to a small rope tied around the bull’s horns. The bull jerked his head down pulling Jake’s head and shoulders forward, and then reared up. Jake fell 10 feet away hitting his head in the gravel. Reports vary as to whether he saw “three or four moons” or “a lot of stars.” Ross’s staunchest advocates don’t say he successfully rode Corbett in Belgrade, but they claim the experience helped him make a successful ride in Helena.

In his reminiscence, Ross said he had a medal that proved he was the only man that “ever rode the Belgrade Bull according to the rules.” An article from the Townsend Star, the editor said he had seen the medal, but it had been stolen.

Pres Johnston said of the medal, “Where he got it, I don’t know. Neither my brother nor I ever signed it for him or anything like it for anyone.’

Frank Collins was more blunt: “I don’t know who Jake got to make that medal, but it was a phony. Jake fooled the people with that medal until I think he got to believe it himself.”

Still, Ross had supporters. An article in the Belgrade Journal quoted a Butte man saying, “I saw Jake Ross ride the Belgrade Bull to a finish in Helena” and another man claiming to be an eyewitness who said Ross managed to ride the bull by jumping aboard after the bull made his first jump

It is difficult to make sense of the jumble of claims. Maybe Jake Ross did get a medal for riding an animal called “The Belgrade Bull,” but not the one owed by the Johnston brothers. A Brahma bull called “Sharkey, The Belgrade Bull” appears in rodeo histories and there may have been others,

But if Ross rode another Belgrade Bull, why didn’t he say so? Surely he could tell the difference between a Brahma and a Holstein. Also, Pres Johnston said Jake’s medal bore the Johnston brothers names. Perhaps Pres was mis-remembering events from decades past.

Information about Corbett is buried in decaying newspaper archives across Montana. There is probably more to be discovered in diaries, reminiscences, and letters. Someday someone may find a document that answers the question: Did anyone ever ride Belgrade Bull with a clean saddle?

— To see all of the stories about Corbett, The Belgrade Bull, click on “Belgrade Bull” under “Categories” in the column to the right.

One thought on “The Belgrade Bull 5: The Jake Ross Controversy”