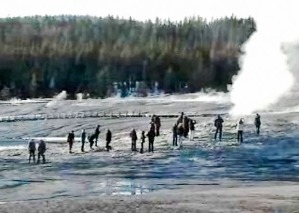 A front-page article in the Bozeman Daily Chronicle reported this morning that a group of tourists had been caught on video standing within a few feet of the famous Old Faithful Geyser. Chronicle Staff Writer Daniel Person reported: “The outrageous incident was captured by a webcam that broadcast live footage of Old Faithful and is unlike anything park officials have seen in recent times.” 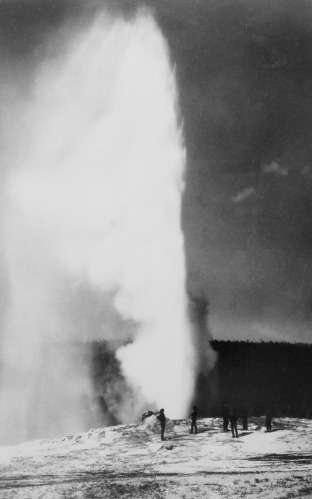 I was struck by the similarity between the new picture and famed Yellowstone Photographer William Henry Jackson’s 1871 photo of Old Faithful. Jackson’s photo shows members of the government sponsored Hayden Expedition standing closer to the geyser than did the 2011 visitors.  Certainly, Jackson’s photo, which is thought to be the first taken of the famous geyser,  doesn’t document “outrageous” behavior. It shows that over the last 140 years people have learned how to protect themselves and the wonders of Yellowstone.

My collections of first-person accounts of early travel to Yellowstone Park includes reports of all kinds of things that would be considered outrageous today like gathering mineral specimens by the wagon load, hunting bald eagles for sport, and dumping rubble in Old Faithful just to see what would happen.

We can be glad that such activities are now considered to be outrageous.