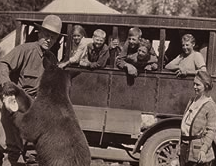 When I visited Yellowstone Park with my parents as a boy, my mother admonished my brother and me not to feed the bears, and my father said the warning signs used to read, “Bears Will Eat Candy and Fingers Right Off Your Hands.” Despite regulations forbidding  bear feeding, many people did it to entice the animals for close-up views. And the bears obliged by leaning next to car windows to beg for treats and parading their cubs. Although”bear jams” sometimes blocked traffic for miles, most people figured that was just a price that had to be paid to see their antics. It seemed normal to President Theodore Roosevelt too. Here’s how he described Yellowstone bears about 1914.

It was amusing to read the proclamations addressed to the tourists by the Park management, in which they were solemnly warned that the bears were really wild animals, and that they must on no account be either fed or teased. It is curious to think that the descendants of the great grizzlies which were the dread of the early explorers and hunters should now be semi-domesticated creatures, boldly hanging around crowded hotels for the sake of what they can pick up, and quite harmless so long as any reasonable precaution is exercised. They are much safer, for instance, than any or dairy bull or stallion, or even ram, and, in fact, there is no danger from them at all unless they are encouraged to grow too familiar or are in some way molested.

Of course, among the thousands of tourists, there is a percentage of thoughtless and foolish people; and when such people go out in the afternoon to look at the bears feeding they occasionally bring themselves into jeopardy by some senseless act. The black bears and the cubs of the bigger bears can readily be driven up trees, and some of the tourists occasionally do this. Most of the animals never think of resenting it; but now and then one is run across which has its feelings ruffled by the performance.

In the summer of 1902, the result proved disastrous to a too inquisitive tourist. He was traveling with his wife, and at one of the hotels, they went out toward the garbage pile to see the bears feeding. The only bear in sight was a large she, which, as it turned out, was in a bad temper because another party of tourists a few minutes before had been chasing her cubs up a tree. The man left his wife and walked toward the bear to see how close he could get. When he was some distance off, she charged him, whereupon he bolted back toward his wife. The bear overtook him, knocked him down and bit him severely. But the man’s wife, without hesitation, attacked the bear with that thoroughly feminine weapon, an umbrella, and frightened her off. The man spent several weeks in the Park hospital before he recovered.

Perhaps the following telegram sent by the manager of the Lake Hotel to Major Pitcher illustrates with sufficient clearness the mutual relations of the bears, the tourists, and the guardians of the public weal in the Park. The original was sent me by Major Pitcher. It runs:

“Lake. 7-27-’03. Major Pitcher, Yellowstone: As many as seventeen bears in an evening appear on my garbage dump. To-night eight or ten. Campers and people not of my hotel throw things at them to make them run away. I cannot, unless there personally, control this. Do you think you could detail a trooper to be there every evening from say six o’clock until dark and make people remain behind danger line laid out by Warden Jones? Otherwise, I fear some accident. The arrest of one or two of these campers might help. My own guests do pretty well as they are told. James Barton Key. 9 A. M.”

At times, the bears get so bold that they take to making inroads on the kitchen. One completely terrorized a Chinese cook. It would drive him off and then feast upon whatever was left behind. When a bear begins to act in this way or to show surliness it is sometimes necessary to shoot it. Other bears are tamed until they will feed out of the hand, and will come at once if called. Not only have some of the soldiers and scouts tamed bears in this fashion, but occasionally a chambermaid or waiter girl at one of the hotels has thus developed a bear as a pet.

The accompanying photographs not only show bears very close up, with men standing by within a few yards of them, but they also show one bear being fed from the piazza by a cook, and another standing beside a particular friend, a chambermaid in one of the hotels. In these photographs, it will be seen that some are grizzlies and some black bears.

This whole episode of bear life in the Yellowstone is so extraordinary that it will be well worthwhile for any man who has the right powers and enough time, to make a complete study of the life and history of the Yellowstone bears. Indeed, nothing better could be done by some one of our outdoor faunal naturalists than to spend at least a year in the Yellowstone, and to study the life habits of all the wild creatures therein. A man able to do this, and to write down accurately and interestingly what he had seen, would make a contribution of permanent value to our nature literature with their majestic beauty all unmarred.

— To find more stories about bears, click on “Bears” under the “Categories” button to the left.