The trappers who visited the Yellowstone Plateau in the early 1800’s told about the wonders they had seen, but their reports often were  dismissed as tall tales. Perhaps that’s because they had a well developed tradition of entertaining themselves by spinning yarns around their campfires. Osborne Russell, who visited the upper Yellowstone with the Jim Bridger brigade in the 1830’s, described a story telling session in his famous Journal of a Trapper.

We killed a fat elk and camped at sunset in a smooth, grassy spot between two high, shaggy ridges, watered by a small stream which came tumbling down the gorge behind us. 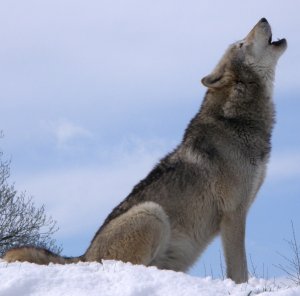 As we had passed the infernal regions we thought, as a matter of course, this must be a commencement of the Elysian Fields, and accordingly commenced preparing a feast. A large fire was soon blazing, encircled with sides of elk ribs and meat cut in slices, supported on sticks, down which the grease ran in torrents.

The repast being over, the jovial tale goes round the circle, the peals of loud laughter break upon the stillness of the night which, after being mimicked in the echo from rock to rock dies away in the solitary gloom. Every tale reminds an auditor of something similar to it but under different circumstances, which, being told, the “laughing part” gives rise to increasing merriment and furnishes more subjects for good jokes and witty sayings such as a Swift never dreamed of.

Thus the evening passed, with eating, drinking and stories, enlivened with witty humor until near midnight, all being wrapped in their blankets lying round the fire, gradually falling to sleep one by one, until the last tale is encored by the snoring of the drowsy audience. The speaker takes the hint, breaks off the subject and wrapping his blanket more closely about him, soon joins the snoring party.

The light of the fire being superseded by that of the moon just rising from behind the eastern mountain, a sullen gloom is cast over the remaining fragments of the feast and all is silent except the occasional howling of the solitary wolf on the neighboring mountain, whose senses are attracted by the flavor of roasted meat, but fearing to approach nearer, he sits upon a rock and bewails his calamities in piteous moans which are reechoed among the mountains.

— You can read more excerpts from Osborne Russell’s Journal of a Trapper in my book, Adventures in Yellowstone.