On Friday afternoon, while I was doing my usual shift as a volunteer at the Pioneer Museum of Bozeman, I saw that the new edition of the Pioneer Museum Quarterly was out.  Of course, I immediately went through it to look at my article on Gillman Sawtell.  It’s a companion piece to the one I published last summer on Fred Bottler. 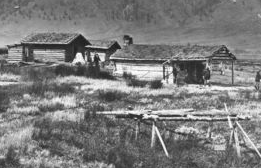 Sawtell and Bottler were pioneer ranchmen who in the 1860s staked out claims on the edges of what was to become Yellowstone Park—Bottler in the Paradise Valley north of the park, Sawtell at Henry’s Lake to the west.  Their ranches became stopping points for early Yellowstone explorers and tourists and both were park guides.  Here’s a excerpt from the Quarterly article on Sawtell.

Sawtell staked his claim on the northwest edge of Henrys Lake and launched a group of enterprises that included ranching, commercial hunting and guiding tourists.

Sawtell’s main business was harvesting and selling fish, as many as 40,000 of them a year. He reportedly caught as many as 160 trout an hour, averaging two and a half pounds each, with a hook and line. In winter when the lake froze over, springs kept open a small area near Sawtell’s compound. Fish swarmed the open water and Sawtell harvested them with a spear.

Sawtell sawed blocks of ice from the lake in winter and stored them packed in sawdust in a sturdy thick-walled icehouse he built of logs. He stored his catch in the icehouse until he had enough to fill his wagon. As late as 1896, Sawtell was hauling fish to Monida where they were loaded into railroad cars for sale in Butte and Ogden, Utah.

While launching his enterprises, Sawtell built a veritable village. He had six sturdy log buildings: a residence, a blacksmith shop, a stable, a storage shed for hides and game, and his icehouse. He apparently had guests in mind when he built the compound. His whitewashed house was big enough to accommodate 20 people and had numerous bedsteads, stools, and tables. He kept enough stoneware to serve that many.

Sawtell kept tamed antelope and elk at his ranch. In 1871, he used a rowboat to run down several baby swans. He raised the signets until they were big enough to travel (about the size of domestic geese) and shipped them to New York City for Central Park.

In 1871, Sawtell guided a group of men from Virginia City and Deer Lodge on a tour that covered the geyser basins, Yellowstone Lake, and the Grand Canyon of the Yellowstone. Because of this trip, Sawtell is credited with being the first commercial Yellowstone guide.

—  You can read the rest of my article about Gilman Sawtell by buying a copy of the Quarterly at the Pioneer Museum of Bozeman.  Better stil, join the Gallatin Historical Society and get a free subscription.

— You might also enjoy my story about Fred Bottler, who settled in the Paradise Valley north of Yellowstone Park in 1867.