The story below was included as an example of student writing in a 1914 composition textbook for college freshmen. The textbook authors didn’t give the student’s name or the year the piece was written, but apparently it was after the army took over administration of Yellowstone in 1886. 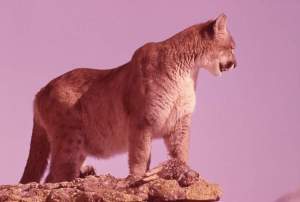 The Secretary of Interior promulgated a regulation in 1883 that prohibited hunting in Yellowstone Park, but that was generally interpreted as not applying to predators. In fact the general policy toward predators—cayotes, wolves, bears, wolverines, and mountain lions—was “shoot on sight.” Predators weren’t protected in the park until the 1930s.

The textbook authors praise this account as an “ambitious and  effective narrative theme.”  I agree.

“Whoa there! Back into the road, you black brute! What are you shyin’ at?” yelled the driver of a sightseeing coach in the Yellowstone.

He glanced across the bridge and immediately learned the reason for the strange behavior of one of his leaders. There, in a leather-wood thicket, crouched the long, lithe form of a mountain lion. Its wicked yellow eyes challenged his right to the passage, and its long slender tail writhed among the bushes. The driver pulled up his horses, uncertain of the lion’s intentions; but the great cat, finding himself unmolested, slipped through the bushes and disappeared among the jagged rocks on the mountain slope.

As the coach was discharging its passengers at the next stopping place, the driver yelled to a camp boy, “Go over and tell the guards I saw that big lion they’ve been looking for, down by the last bridge. Tell ’em they’d better hurry before he leaves the country.”

The boy lost no time; and soon two of the soldiers were at the bridge, carefully examining the tracks of the great beast from the impressions in the loose dirt. They quickly learned that this lion was the very one with which they had been having a great deal of trouble, the one which had invaded camps during the night, and had terrified tourists with his long-drawn, almost human wail from the forests.

Clambering over the great grey rocks, and sliding in the loose gravel of the slope, the two soldiers made their way slowly up the mountain side. When they reached the first promontory they stopped to rest and look about them. Far to the left and a mile below them, still shrouded by the evening mists yet tinted now by the morning sun, lay the magnificent and awe-inspiring Yellowstone Gorge. They gazed at the green thread winding along the floor of the great chasm and tried to hear what they knew to be the roar of its rushing waters.

“It’s a great sight, Judd! We don’t realize it, bein’ here all the time. But come on. Let’s hit the trail again.”

“Wait a second.” replied the other. “Help me tighten this bandage on my hand. It’s come loose.”

The men, intent upon the loosened bandage, failed to see that, from the edge of an overhanging rock above them, two pale green eyes were watching their every move. Behind the eyes, the sinewy form of a great cat was stealthily adjusting itself for a leap.

Having tightened the bandage, the men straightened up and at the same time stepped back a pace. Their feet, imbedded in the loose gravel, began to slide, and together the two soldiers rolled back under the overhanging rock. At the same instant a great tawny streak flashed over their heads, and the huge form of the mountain lion crashed into the rocks at the very place upon which they had been standing.

They jumped to their feet and, with startled eyes, watched the great ball of yellow fur as it bumped and rolled down the steep incline. The lion tore madly at the rocks and bushes as he fell, but tried in vain to secure a footing in the sliding gravel. A hundred feet below, he stopped with a thud against a fallen tree trunk; but before he could move, two bullets crunched their way through his body, and, with a gasp, he straightened out, dead.

3 thoughts on “A Tale: Hunting a Yellowstone Lion”