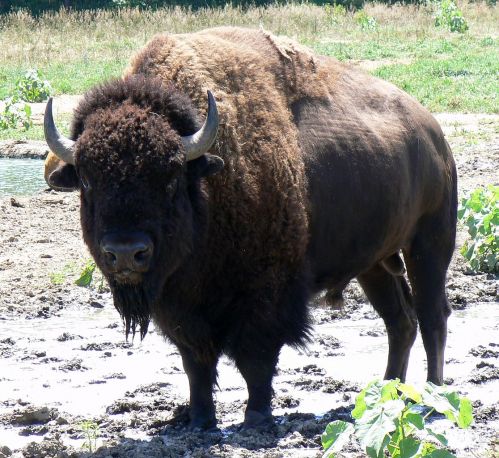 American bison once numbered 30 million or more, but by the middle of the 1880’s commercial hunters had decimated the herds that once darkened the prairies. But the fact that bison were nearing extinction didn’t deter sportsmen from pursuing the thrill of killing one of the magnificent animals.

Even Theodore Roosevelt, who is renowned for his role in the American conservation movement and environment preservation, could not resist the temptation of bison hunting. Here’s how he described the experience.

In the fall of 1889 I heard that a very few bison were still left around the head of Wisdom River. Thither I went and hunted faithfully; there was plenty of game of other kind, but of bison not a trace did we see. Nevertheless a few days later that same year I came across these great wild cattle at a time when I had no idea of seeing them.

We had gone out to find moose, but had seen no sign of them, and had then begun to climb over the higher peaks with an idea of getting sheep. The old hunter who was with me was, very fortunately, suffering from rheumatism, and he therefore carried a long staff instead of his rifle; I say fortunately, for if he had carried his rifle it would have been impossible to stop his firing at such game as bison, nor would he have spared the cows and calves.

About the middle of the afternoon we crossed a low, rocky ridge, above timber line, and saw at our feet a basin or round valley of singular beauty. The ground rose in a pass evidently much frequented by game in bygone days, their trails lying along it in thick zigzags, each gradually fading out after a few hundred yards, and then starting again in a little different place, as game trails so often seem to do.

We bent our steps toward these trails, and no sooner had we reached the first than the old hunter bent over it with a sharp exclamation of wonder. There in the dust were the unmistakable hoof-marks of a small band of bison, apparently but a few hours old. There had been half a dozen animals in the party; one a big bull, and two calves.

We immediately turned and followed the trail. It led down to the little lake, where the beasts had spread and grazed on the tender, green blades, and had drunk their fill. The footprints then came together again, showing where the animals had gathered and walked off in single file to the forest

It was a very still day, and there were nearly three hours of daylight left. Without a word my silent companion, who had been scanning the whole country with hawk-eyed eagerness, besides scrutinizing the sign on his hands and knees, took the trail, motioning me to follow. In a moment we entered the woods, breathing a sigh of relief as we did so; for while in the meadow we could never tell that the buffalo might not see us, if they happened to be lying in some place with a commanding lookout.

The old hunter was thoroughly roused, and he showed himself a very skilful tracker. We were much favored by the character of the forest, which was rather open, and in most places free from undergrowth and down timber. The ground was covered with pine needles and soft moss, so that it was not difficult to walk noiselessly. Once or twice when I trod on a small dry twig, or let the nails in my shoes clink slightly against a stone, the hunter turned to me with a frown of angry impatience; but as he walked slowly, continually halting to look ahead, as well as stooping over to examine the trail, I did not find it very difficult to move silently.

At last,  we saw a movement among the young trees not fifty yards away. Peering through the safe shelter yielded by some thick evergreen bushes, we speedily made out three bison, a cow, a calf, and a yearling. Soon another cow and calf stepped out after them. I did not wish to shoot, waiting for the appearance of the big bull which I knew was accompanying them.

So for several minutes I watched the great, clumsy, shaggy beasts, as all unconscious they grazed in the open glade. Mixed with the eager excitement of the hunter was a certain half melancholy feeling as I gazed on these bison, themselves part of the last remnant of a doomed and nearly vanished race. Few, indeed, are the men who now have, or ever more shall have, the chance of seeing the mightiest of American beasts, in all his wild vigor, surrounded by the tremendous desolation of his far-off mountain home.

At last, when I had begun to grow very anxious lest the others should take alarm, the bull likewise appeared on the edge of the glade, and stood with outstretched head, scratching his throat against a young tree, which shook violently. I aimed low, behind his shoulder, and pulled trigger. At the crack of the rifle all the bison, without the momentary halt of terror-struck surprise so common among game, turned and raced off at headlong speed.

The fringe of young pines beyond and below the glade cracked and swayed as if a whirlwind were passing, and in another moment they reached the top of a very steep incline, thickly strewn with boulders and dead timber. Down this they plunged with reckless speed; their surefootedness was a marvel in such seemingly unwieldy beasts. A column of dust obscured their passage, and under its cover they disappeared in the forest; but the trail of the bull was marked by splashes of frothy blood, and we followed it at a trot.

Fifty yards beyond the border of the forest we found the stark black body stretched motionless. He was a splendid old bull, still in his full vigor, with large, sharp horns, and heavy mane and glossy coat; and I felt the most exulting pride as I handled and examined him; for I had procured a trophy such as can fall henceforth to few hunters indeed.

— Abridged from Theodore Roosevelt. “The Bison or American Buffalo,” pages 3-36 in Hunting the Grisly and Other Sketchs. New York: The Review of Reviews Company, 1915.

— For more stories about hunting in or near Yellowstone Park, click on “hunting” under “Categories” to the left.

One thought on “A Tale: TR Seeks the Thrill of Killing Endangered Bison — 1889”