Corinne Roosevelt Robinson published a book in 1921 about her memories of her late brother, President Theodore Roosevelt. She described the summer of 1890 when TR acquiesced to requests that he take his family to Yellowstone Park, a place he visited often. Although she praised his geniality and good cheer, Corinne made it clear that TR didn’t like the comforts required by the ladies on the trip and would rather be “roughing it.”

In her book, Corinne included a letter that she sent to her aunt about the trip. She said she decided not to “terrify” her aunt by reporting the seriousness of the injuries TR’s wife, Edith, suffered when she fell off a horse. Here’s an excerpt. 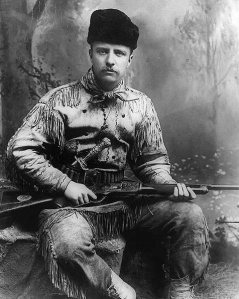 “We have had a most delightful two weeks’ camping and have enjoyed every moment. The weather has been cloudless, and though the nights were cold, we were only uncomfortable one night. We were all in the best of health and the best of spirits, and ate without a murmur the strange meals of ham, tomatoes, greasy cakes and coffee prepared by our irresistible Chinese cook. Breakfast and dinner were always the same, and lunch was generally bread and cheese carried in our pockets and eaten by the wayside. We have really had great comfort, however, and have enjoyed the pretense of roughing it and the delicious, free, open-air life hugely—and such scenery!

Nothing in my estimation can equal in unique beauty the Yellowstone canyon, the wonderful shapes of the rocks, some like peaks and turrets, others broken in strange fantastic jags, and then the marvelous colors of them all. Pale greens and yellows, vivid reds and orange, salmon pinks and every shade of brown are strewn with a lavish hand over the whole Canyon—and the beautiful Falls are so foamy and white, and leap with such exultation from their rocky ledge 360 feet down.

We had one really exciting ride. We had undertaken too long an expedition, namely, the ascent of Mt. Washburn, and then to Towers’ Falls in one day, during which, to add to the complications, Edith had been thrown and quite badly bruised. We found ourselves at Tower Falls at six o’clock in the evening instead of at lunchtime, and realized we were still sixteen miles from Camp, and a narrow trail only to lead us back, a trail of which our guide was not perfectly sure.

We galloped as long as there was light, but the sun soon set over the wonderful mountains, and although there was a little crescent moon, still, it soon grew very dark and we had to keep close behind each other, single file, and go very carefully as the trail lay along the mountainside. Often we had to traverse dark woods and trust entirely to the horses, who behaved beautifully and stepped carefully over the fallen logs. Twice, Dodge, our guide, lost the trail, and it gave one a very eerie feeling, but he found it again and on we went.

Once at about 11 p.m., Theodore suggested stopping and making a great fire, and waiting until daylight to go on, for he was afraid that we would be tired out, but we all preferred to continue, and about 11:30, to our great joy, we heard the roar of the Falls and suddenly came out on the deep Canyon, looking very wonderful and mysterious in the dim star-light. We reached our Camp after twelve o’clock, having been fifteen hours away from it, thirteen and a half of which we had been in the saddle. It was really an experience.”

It was a hazardous ride and I did not terrify my aunt by some of the incidents such as the severe discomfort suffered by Mrs. Theodore Roosevelt when she was thrown and narrowly escaped a broken back, and when a few hours later my own horse sank in a quicksand and barely recovered himself in time to struggle to terra firma again, not to mention the dangers of the utter darkness when the small, dim crescent moon faded from the horizon.

My brother was the real leader of the cavalcade, for the guide, Ira Dodge, proved singularly incompetent. Theodore kept up our flagging spirits, exhausted as we were by the long rough day in the saddle, and although furious with Dodge because of his ignorance of the trail through which he was supposed to guide us, he still gave us the sense of confidence, which is one’s only hope on such an adventure. Looking back over that camping trip in the Yellowstone, the prominent figure of the whole holiday was, of course, my brother. He was a boy in his tricks and teasing, crawling under the tent flaps at night, pretending to be the unexpected bear, which we always dreaded. He was a real inspiration in his knowledge of the fauna and birds of the vicinity and his willingness to give us the benefit of that knowledge.

One thought on “A Tale: “Near Roughing It” With TR — Corinne Roosevelt Robinson, 1890”