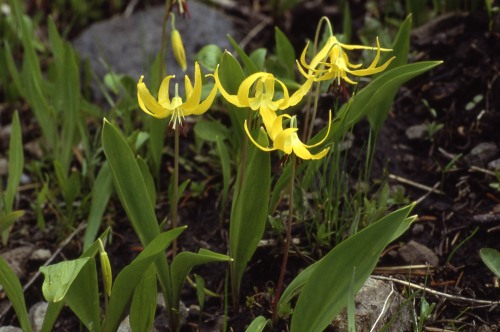 Hiram Martin Chittenden arrived at Yellowstone Park in 1891 to take command of the Army Corps of Engineers unit that was in charge of making improvements there. Chittenden left his mark on the park in many ways including the figure-eight pattern of roads called the “Grand Loop,” the Roosevelt Arch at the north entrance, and the single arch Chittenden Bridge across the Yellowstone River.

Chittenden was also a historian whose works include a two-volume history of the American fur trade in the west, a history of steamboats on the Missouri River, and first definitive history and description of Yellowstone Park. Here’s Chittenden’s description of a wild “Easter Lily” that grows in the Park.

One of the daintiest of all the flowers, and one somewhat resembling the Columbine in grace of form, is the yellow Adder’s Tongue (Erythronium). This has been called the Dogtooth Violet, surely a gross misnomer. In California it is most appropriately called the Easter Lily, but Easter has long passed before it makes its appearance in the Park. There is no gayer sight than a mass of these yellow lilies, as one comes upon them in the woods under some spreading tree—as “jocund company” as are the daffodils which inspired Wordsworth’s immortal lines.