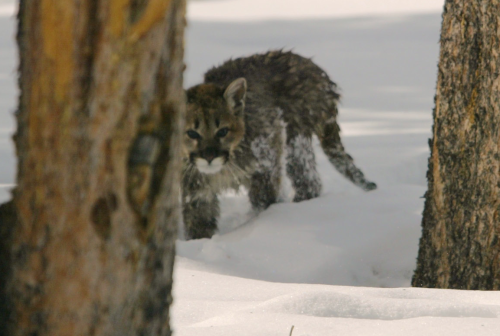 By the time Gardner Stillson Turrill toured Yellowstone Park in 1898, the Army had outlawed hunting there and made tourists either leave their guns in storage or have them sealed when they entered the park. Despite the gun regulations, hunters still were drawn to the area. In fact, conservations like Theodore Roosevelt promoted the idea that protecting game animals inside park boundaries would make for to abundant hunting on the periphery.

Turrill and his companions not only were avid hunters, they also entertained each other buy telling hunting stories. Here’s a tale one of Turrill’s friends told about an adventure he had while staying with an old man in a cabin high in the Wyoming Mountains.

One night I was awakened by a shuffling noise overhead and the heavy footfall of some large animal that was evidently on the cabin roof. I got out of bed to make sure the door and window were securely fastened, and, as additional precaution, I set my rifle at the head of the bunk and piled some dry pine knots on the fire.

I heard nothing more that night, but the next morning I saw the tracks of an extra large mountain lion on all sides of the house as well as in the snow on the roof. After breakfast I told the old man that I was going out for a little hunt and warned him not to be uneasy if I were gone several hours.

I followed the tracks of the big cat as he had made his way to the creek. I was fond of adventure and was determined to have a shot at the animal if I could possibly overtake him.

The snow was soft, but with snowshoes I was able to make good time. In places I noticed where the lion had broken through into deep drifts and the way they were ploughed and scattered by the beast in his efforts to flounder through one could almost imagine that a horse had been forcing his way across. The animal surely must have been hungry to go so far from his lair in the deep snow!

I soon reached the creek and followed the tracks on over to the other side. The trail now wound here and there among the trees. up the hillside toward a bold bare bluff that towered above the trees several hundred yards ahead of me. I had been advancing with the utmost caution, but now decided that the animal had surely gone to his den somewhere along the base of the cliff

“Very good.” I thought to myself. ” I will follow the tracks to the den, then climb a tree and shoot Mr. Catamount at my leisure whenever he sees fit to come out. The animal will soon be mine now and I will have a fine skin for my morning’s walk.

Occupied with these pleasing reflections I shouldered my gun and, as I walked along, looked away through the trees at the precipitous bluff that was my objective point. But suddenly I came to my senses with a start. The panther trail had disappeared.

I retraced my steps a few rods till I came again to the huge cat-like tracks that I had been following. They seemed to end right there. It was very strange. Did the creature have wings? ‘I pursed my lips to fetch a dismayed whistle, but that whistle was never uttered.

Quicker than lightning the truth flashed over me. The animal had taken to a tree. and was even then, very likely, making ready for a spring. If I had been experienced I would not have walked into such a trap.

My heart seemed to stop beating and my blood appeared to be frozen in my veins. A feeling of deadly weakness came over me, but only for a second. Hastily I grasped the gun and looked up. To run would be to court instant death. My only hope was that I might see the beast before he sprang.

Eagerly I scanned the branches above me but could discern nothing. A moment of breathless suspense, and then I heard a soft patting sound which could be nothing else than the beast’s tail striking against a branch, as he switched it to and fro. The sound seemed to come from a huge spruce just in front of me.

Looking closely I was able to make out the dark indistinct form lying along one of the main branches in the shadow of the thick foliage. To hesitate was fatal and to miss my mark would be equally so. I hastily threw the gun to my shoulder and pulled the trigger.

The report of the rifle was followed by a shrill scream as the lion hurled himself at me through the air. But my bullet had taken effect in his shoulder and he fell short.

I tried to shoot again, but the lever caught for some cause. and the beast came at me snarling and spitting in a terrible fury. The instinct of self-preservation was strong and mustering all my strength. I shoved the muzzle of the gun right into those cruel red jaws.

The panther gagged, bit at the barrel of the gun and tried to get at me. The next second I gave a jerk on the lever, disengaged it and shoved a cartridge into place. Just as I felt my strength leaving. I pulled the trigger; the old gun roared and the panther fell at my feet with its head literally torn to pieces.

It was a very weak and humble hunter that pulled himself together. walked back across the creek and up the mountain side to the little cabin. I have never shot a mountain lion since, and I hope that I will never again have occasion to do so.

For more hunting tales, click “Hunting” under the Categories button.