In 1896, naturalist and writer Ernest Thompson Seton went to Yellowstone Park to inventory animals there for a magazine assignment. He spent a day watching bears at the Fountain Hotel dump near the Lower Geyser Basin. Such bear watching was common then.

Seton saw a momma black bear called “Grumpy” pick a fight with a huge grizzly called “Wahb” to protect her sickly cub. After the battle, Seton interviewed hotel employees to find out as much as he could about the bears. Based on his research, Seton wrote his famous story, “Johnny Bear,” and a book, Biography of a Grizzly.

The most memorable incident in “Johnny Bear,” is the battle between Grumpy and Wahb, but in it Seton described other adventures like Grumpy’s encounter with an even more formidable foe.

Grumpy herself was fond of plum jam. The odor was now, of course, very strong and proportionately alluring; so Grumpy followed it somewhat cautiously up to the kitchen door. There was nothing surprising about this. The rule of “live and let live” is 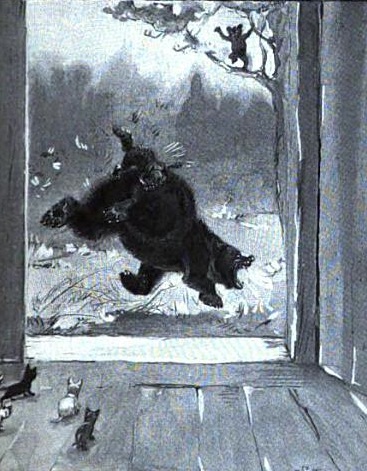 so strictly enforced in the park that the bears often come to the kitchen door for pickings, and on getting something, they go quietly back to the woods. Doubtless Johnny and Grumpy would each have gotten their tart but that a new factor appeared in the case.

That week the Hotel people had brought a new cat from the East. She was not much more than a kitten, but still had a litter of her own, and at the moment that Grumpy reached the door, the cat and her family were sunning themselves on the top step. Pussy opened her eyes to see this huge, shaggy monster towering above her.

The cat had never before seen a bear—she had not been there long enough; she did not know even what a bear was. She knew what a dog was, and here was a bigger, more awful bobtailed black dog than ever she had dreamed of coming right at her. Her first thought was to fly for her life. But her next was for the kittens. She must take care of them. She must at least cover their retreat. So, like a brave little mother, she braced herself on that doorstep, and spreading her back, her claws, her tail, and everything she had to spread, she screamed out at the bear an unmistakable order to, “STOP!”

The language must have been “cat,” but the meaning was clear to the bear; for those who saw it maintain stoutly that Grumpy not only stopped, but she also conformed to the custom of the country and in token of surrender held up her hands.

However, the position she thus took made her so high that the cat seemed tiny in the distance below. Old Grumpy had faced a Grizzly once, and was she now to be held up by a miserable little spike-tailed skunk no bigger than a mouthful? She was ashamed of herself, especially when a wail from Johnny smote on her ear and reminded her of her plain duty, as well as supplied his usual moral support.

So she dropped down on her front feet to proceed.

But Grumpy ignored the command. A scared mew from a kitten nerved the cat, and she launched her ultimatum, which ultimatum was herself. Eighteen sharp claws, a mouthful of keen teeth, had Pussy, and she worked them all with a desperate will when she landed on Grumpy’s bare, bald, sensitive nose, just the spot of all where the bear could not stand it, and then worked backward to a point outside the sweep of Grumpy’s claws. After one or two vain attempts to shake the spotted fury off, old Grumpy did just as most creatures would have done under the circumstances; she turned tail and bolted out of the enemy’s country into her own woods.

But Puss’s fighting blood was up. She was not content with repelling the enemy; she wanted to inflict a crushing defeat, to achieve an absolute and final rout. And however fast old Grumpy might go, it did not count, for the cat was still on top, working her teeth and claws like a little demon. Grumpy, always erratic, now became panic stricken. The trail of the pair was flecked with tufts of long black hair, and there was even blood shed. Honor surely was satisfied, but Pussy was not. Round and round they had gone in the mad race. Grumpy was frantic, absolutely humiliated, and ready to make any terms; but Pussy seemed deaf to her cough-like yelps, and no one knows how far the cat might have ridden that day had not Johnny unwittingly put a new idea into his mother’s head by bawling in his best style from the top of his last tree, which tree Grumpy made for and scrambled up.

This was so clearly the enemy’s country and in view of his reinforcements that the cat wisely decided to follow no farther. She jumped from the climbing bear to the ground, and then mounted sentry guard below, marching around with tail in the air, daring that bear to come down. Then the kittens came out and sat around, and enjoyed it all hugely. And the mountaineers assured me that the bears would have been kept up the tree till they were starved, had not the cook of the Hotel come out and called off his cat—although his statement was not among those vouched for by the officers of the Park.

— You can read a condensed version Ernest Thompson Seton’s “Johnny Bear” in my book, Adventures in Yellowstone.

One thought on “A Tale: An Unfair Fight Between a Bear and a Pussy Cat — Ernest Thompson Seton, 1896”