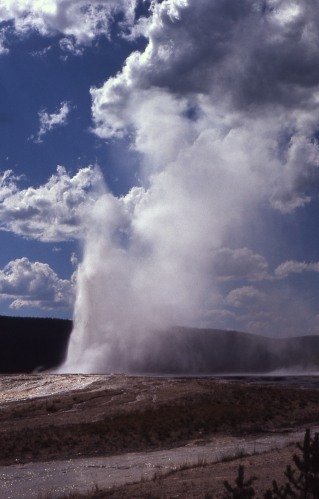 When it was a brand new magazine, Scribner’s Monthly hired Thomas Moran to illustrate N. P. Langford’s two-part report of the Yellowstone wonders he saw on the Washburn Expedition of 1870. Because Moran conjured the illustrations based soley on Langford’s descriptions, it’s particularly interesting to compare what the writer said to what the artist drew.

Here’s Langford’s description of Giantess Geyser and Moran’s conception of it. As you can see by comparing the illustration to the the photo above, Moran’s pagoda style geyser isn’t very realistic. But it is an interesting interpretations of Langford’s words.

Our search for new wonders leading us across the Fire Hole River, we ascended a gentle incrusted slope, and came suddenly upon a large oval aperture with scalloped edges, the diameters of which were eighteen and twenty-five feet, the sides corrugated and covered with a grayish-white silicious deposit, which was distinctly visible at the depth of one hundred feet below the surface.

No water could be discovered, but we could distinctly hear it gurgling and boiling at a great distance below. Suddenly it began to rise, boiling and spluttering, and sending out huge masses of steam, causing a general stampede of our company, driving us some distance from our point of observation. When within about forty feet of the surface it became stationary, and we returned to look down upon it. It was foaming and surging at a terrible rate, occasionally emitting small jets of hot water nearly to the mouth of the orifice.

All at once it seemed seized with a fearful spasm, and rose with incredible rapidity, hardly affording us time to flee to a safe distance, when it burst from the orifice with terrific momentum, rising in a column the full size of this immense aperture to the height of sixty feet; and through and out of the apex of this vast aqueous mass, five or six lesser jets or round columns of water, varying in size from six to fifteen inches in diameter, were projected to the marvelous height of two hundred and fifty feet.

These lesser jets, so much higher than the main column, and shooting through it, doubtless proceed from auxiliary pipes leading into the principal orifice near the bottom, where the explosive force is greater. If the theory that water by constant boiling becomes explosive when freed from air be true, this theory rationally accounts for all irregularities in the eruptions of the geysers.

This grand eruption continued for twenty minutes, and was the most magnificent sight we ever witnessed. We were standing on the side of the geyser nearest the sun, the gleams of which filled the sparkling column of water and spray with myriads of rainbows, whose arches were constantly changing—dipping and fluttering hither and thither, and disappearing only to be succeeded by others, again and again, amid the aqueous column, while the minute globules into which the spent jets were diffused when falling sparkled like a shower of diamonds, and around every shadow which the denser clouds of vapor, interrupting the  sun’s rays, cast upon the column, could be seen a luminous circle radiant with all the colors of the prism, and resembling the halo of glory represented in paintings as encircling the head of Divinity.

All that we had previously witnessed seemed tame in comparison with the perfect grandeur and beauty of this display. Two of These wonderful eruptions occurred during the twenty-two hours we remained in the valley. This geyser we named “The Giantess.”

— For more about Moran’s legacy, click on “Thomas Moran” under the Catergories button.