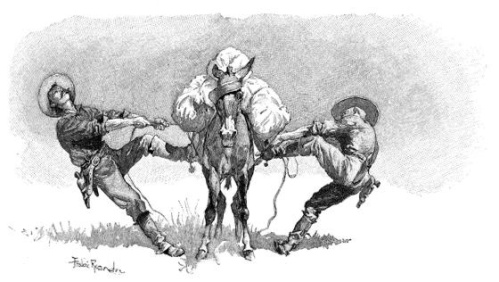 In 1886 the Army took over administration of Yellowstone Park and soon its Corps of Engineers began building “the best roads in America” there. Before that the best way to haul equipment and supplies through the roadless wilderness was by pack mule. But loading the cantankerous animals could be a challenge. Here’s how S. Weir Mitchell described the spectacle of packing mules in 1880.

I reached the camp just in time to see what Mr. Jump, hunter and packer of mules, called “a most awful circus.” As a show it had several drawbacks. What the mule might be if properly brought up is as yet perhaps unknown, but I am quite sure that as at present educated the mule of the West is of an intelligence which, when applied to the development of “cussedness” in all its varieties of illustration, is productive of an amount of profanity in the mule owner which no other subject engenders, and sometimes too of an amount of brutality which makes this form of show unpleasant.

As a rule, however, the worst of all this comes from the mere drivers. The professional packer is a cool, quiet-tempered man, of great patience, of a certain sense of humor, quaint in his talk, critical as to mules, and now and then capable of amazing man and beast by a wild volume of unheard-of and original oaths. Mule packing is a profession, and certain mulepackers are known from Santa Fe to Bismarck. The essence of mule packing consists in tying on a mule’s back some hundreds of pounds of any shape so as to make it impossible for the bearer to kick, buck, roll or rub it off for ten or twelve hours of mountain ravel.

The scene before me was an acre of roughly fenced corral, where, under the shadow of a log hut, lay a dozen or two of critics, the sole population of the valley. There were teamsters, cattle-stickers, prospectors. All wore the stout gray duck pantaloons now so common in the West, and all lounged about, shifting uneasily by reason of the cartridge belt around the waist and the inevitable revolver in the back pocket.

The mule packing interested them curiously, and no connoisseurs at the opera could have been more exacting. The interest was deepened because most of the animals were wagon-mules, never as yet packed, while a few were local celebrities long used to the business. Bad and good, thirty-six wandered grazing in tranquil indifference about the little field, while I joined the critics in the shade, and, lighting a pipe, looked on as Zed Daniels and Mr. Jump, our chief packers, inspected cinch, saddle and aparejo.

The packing began quietly—a tent or clothes-box on each side, some huge thing as a top pack, secured with a maze of ropes. The cinching of the saddle has been bad, the girth being hauled tight enough to be half buried in the skin and to convert the belly into the form of an hour-glass; but when two stout fellows seize each a rope of the pack, and with one helpful foot on either flank of the unhappy mule pull on the diamond hitch, the hour of revolt arrives. Up go the heels.

Critic beside me, with delight: “I knowed ‘at he couldn’t pack that mule. That’s Molly, that mule is. Know her? Guess so, rather. She’s a bell-mule to kick. Well, no, she don’t kick so almighty high, but, I tell you, she p’ints ‘em well. That ‘ar mule ‘ud kick a freckle off a girl’s nose, and she never know it.”

I began to see the fun of mule packing. Neither of the packers said a word. This time a leathern blinder was dropped across Molly’s eyes—a plan which certainly introduces in the mule brain the element of indecision. Then the pack was readjusted with care, and Mr. Daniels, a straw in his lips, drops back a pace, contemplative. Meanwhile, Molly has shaken one wicked, rather comical eye into view over the edge of the blinder. The moment seems well chosen: her heels are everywhere for a few seconds, and that pack is everywhere too. Molly, appeased, nibbles the dry grass. This time the lower jaw and tongue were caught in a running noose, and an effort was made to tie this around the lifted fore leg. As a mule cannot stand on one leg and kick with two legs, the plan seems a good one, though not precisely after the views of Mr. Bergh.

At the first effort to lift her near fore leg, Molly, a mule of genius, actually lifted the off fore leg, which made it impossible to raise the other with the whole weight of the shoulders on it. The smiling, impassive Mr. Daniels neatly noosed the lifted leg, and Molly, apparently convinced, abruptly kneeled down and rolled over, kicking as she rolled. Then the packers kicked also, and amidst immense applause from my neighbors Molly was righted, and once more well packed to the point of tying the last knot, when, without the least warning, she began to kick again, and in a second had cleared a space around her. Then, for the first time, our packer took up his testimony, Molly eying him askance with what must have been a sense of fun.

The things Mr. J. said must be left to the imagination, but as the vocabulary of abuse is unhappily limited, and does not admit of perpetual crescendo when you have begun with an oath as corrosive as nitric acid, he fell away at the close and wound up with, ” You,“ etc. etc. ” I—I— Yes, I’ll fine you, I will.”

At last Molly was packed, and no one could fail to pity the poor beast with the cruel cinching and the great unwieldy load. To stand up was hard enough, to lie down impossible. The latter she tried twenty-three times in twenty-seven minutes, by my watch. At last she contrived to settle down in a little muddy stream amidst the wildest applause from the critics. Then came a rush of a dozen packers, resounding kicks, oaths thick as snowflakes, a lift of Molly’s tail and a lift of her head, feeble rebellion, and the poor beast on her feet again and tied to a fence.

After her came John Henry and Craisy and Whitey and Mayflower, and so on, until, with oath and blow and kick, mule and human, the train was packed and thirty-five mules were tied to the snake fence. The critics got up, and were lounging around, the packers wiping their warm brows, when of a sudden, with an impulse unanimous as a party vote, the fence was pulled down and the mules were scattered far and wide.

At last, however, the white bell-mare, with her foal, was led away, and after her a wayward train of wanderers, kept in order by half a dozen wild horsemen, who urged their little Cayuses along the line, now pushing on a slow animal, now away after a truant, now down to cinch up a loose saddle. It seemed an impossible business, and no one could dream of the order and quiet which a few days’ march would bring about in this obstinate mob.

As I mounted I saw Mr. J. contemplatively regarding the last of the train. “Well,” said I, “do they get on well?”

“I was a-thinkin’,” he answered with a certain sadness in his tones, “that the first day’s mule-packin’ is like the first year of gettin‘ married: thar is allus the devil to pay, and after that it most usually settles.”