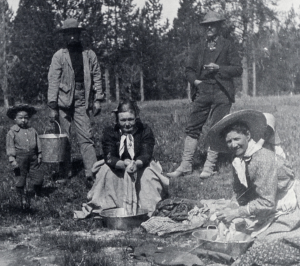 Doing Laundry in a Hot Spring

Indians stole a band of horses the day before Sarah Tracy left Bozeman for Yellowstone Park in June of 1873. But Mrs. Tracy was used to Indians. When she arrived in Bozeman in 1869 with her new husband, Bozeman Pioneer W.H. Tracy, Indians were encamped on the south side of town. She said, “They would peer in the windows if the doors were locked, or come flocking around the door begging for biscuits, soap, clothes, everything.”

Such encounters left Mrs. Tracy with little fear of Indians, but the commander at Fort Ellis still didn’t want to let her party go to Yellowstone in the midst of “Indian troubles.” Finally, after some haggling, he agreed to provide an armed escort.

“We were soon on our way with twelve mounted soldiers following us,” Mrs. Tracy said in a reminiscence she wrote about the trip. “With their guns and knapsacks on their shoulders, and their belts filled with cartridges, they looked very war like.” The soldiers escorted the stage across Trail Creek Pass to the Yellowstone River and then turned back after seeing no signs of Indians. The party then headed south to the Bottler brothers’ ranch. Diaries of early trips to Yellowstone often mention a stop at Bottlers.

In 1868 Frederick and Phillip Bottler started the first permanent ranch in the Paradise Valley. The Bottlers’ ranch was a one-day ride from Bozeman and located halfway to Mammoth Hot Springs. That made it an ideal stopping point for travelers heading for the park. The Bottlers always made visitors welcome and eventually started a guesthouse.

After a night at Bottlers, the stage headed to Mammoth Hot Springs over a new road through Yankee Jim Canyon. This road was so bad Mrs. Tracy said that it “fairly made one shudder to ride over it in a four-wheeled stage coach.” As the coach approached Mammoth passengers got a marvelous view from the top of a hill, but the descent down the mountain required chaining the stage’s rear wheels. This “rough locking” slowed the stage by making it skid and keeping it from crowding the horses.

“We drove up to the hotel with a grand flourish of the four-horse whip, bringing the landlord and the guests to the door to meet us.” This description conjures pictures of an elegant building, but the “hotel” at Mammoth then was just an 25-by-35 foot log cabin with a sod roof. Crude as it was, the hotel had hot and cold running water; a stream of 40 degrees ran on one side and of 150 degrees on the other.

Mrs. Tracy and her companion, Sarah Graham, waited for their husbands to join them for two days. They enjoyed fishing, climbing the terraces, two baths a day and three hearty meals. When the men arrived they all started on horseback for a tour of the Park.

“We rode side saddles,” Mrs. Tracy said, “and it was quite difficult for an amateur rider to keep seated.” Their train of a saddle horse for each traveler and eight packhorses made an impressive appearance strung out on the trail.  Their route frequently crossed the rushing, boulder-strewn Gardiner River, and Sarah said,

I was in great fear of crossing, but as there was no alternative, I had to hold on as best I could. At first, I dismounted to walk over the bad places, but they were so frequent, I concluded to remain in my saddle. One old mountaineer remarked, “Wait until the mountains are so steep you must hold onto the horse’s ears going up, and tail going down.” And we certainly found some mountains where the saddle would slip over the back going up, and nearly over the head coming down. We made only one ride each day, as it was too much work to repack the horses.

At Yellowstone Lake they found the man who had guided Emma Stone’s party, E.S. Topping, and his partner, Frank Williams. The men had recently built a sailboat. They said they would let the first woman to visit name the boat.  Since Mrs. Tracy and Mrs. Graham were both named Sarah, they decided to christen the boat “The Sallie.” Mrs. Tracy said after the name was painted on the boat, “We had a fine sail across the lake and our pictures taken on board,”

At their camp, Topping and Williams rewarded the women by letting them make doughnuts fried in bear grease. In her reminiscence, Mrs. Tracy said of her twelve-day trip:

“The balmy breezes and mountain sunshine had done our complexions to a turn. While our clothing was little worse for wear, yet we had seen the Yellowstone National Park in its primitive beauty. And bear’s grease doughnuts had certainly agreed with us.”

— Sarah Tracy’s reminiscence is at the Museum of the Rockies in Bozeman.

— You also might enjoy reading about Emma Stone, the first woman to make a complete tour of Yellowstone Park.