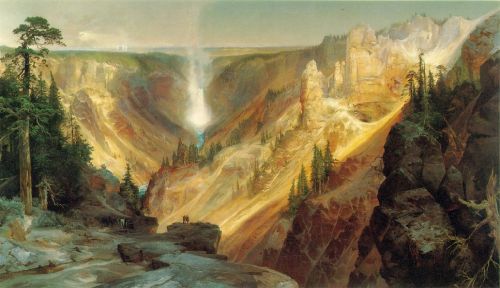 “The Grand Canyon of the Yellowstone,” Thomas Moran

In their journals, many tourists compared the experience of actually seeing the Yellowstone Falls and Canyon to viewing Thomas Moran’s famous painting, “The Grand Canyon of the Yellowstone.” They often disagreed on the question, ”did he get the colors right,” perhaps because the canyon looks different depending on cloud cover and sun angle. But few of them commented on other differences between viewing the painting and what they saw at the canyon.

Moran said “I place no value upon literal transcripts from Nature . …  I did not wish to realize the scene literally, but to preserve and to convey its true impression.” To convey this “true impression,” he included several elements in the painting that could never have been seen at a single time and place.

The painting is 12 feet wide and 7 feet tall making it impossible to see its details here, but one writer described Moran’s painting like this in 1872 when it was new:

One of the last acts of Congress was the purchase of Mr. Thomas Moran’s “Grand Canyon of the Yellowstone,” for ten thousand dollars. It is to be placed above one of the great marble stairways in the Senate wing of the Capitol. It is the most magnificent painting we ever beheld, and we have seen Bierstadt’s “Yo Semite” and “Rocky Mountains.”

The Rocky Mountain range is just visible in the far distance, with the ” Tetons,” three snow covered peaks, rising above. Three of the largest geysers may also be seen in the distance and to the left of the Fall.

The track of the river may be known by a long depression in the distant landscape. On a level plateau of purplish rock, or calcareous substance in the foreground, a few men and horses are standing.

A dead deer or antelope lies near, and behind a cluster of huge pines, on a beetling rock, stands a large bear calmly surveying the scene. To the right in the foreground, the rocks are piled up rugged and high, and in the shadow are of a purplish-brown color.

Just beyond this is a long smooth slope of gold color shaded to a pale primrose on one side, and to a very deep orange on the other, while still beyond rise the wonderful cliffs, which give to the scene a character distinct from any in the world.

The coloring is pale gold in ground work, with lines and figures in violet, crimson, scarlet, deep amber and vermilion—just as if tinted by rainbows and sunbeams! This most strange and beautiful coloring is produced by the water oozing through the veins of the calcareous towers and domes, which are filled with iron and sulphur.

One can readily imagine the tallest cliff to be a vast cathedral, with its outer walls painted in the fadeless colors of Pompeii, and with windows of deeply stained glass. The gorge or Canyon—worn to a great distance by the Fall—is, in the first broad light, of a yellowish gold; then in the deepening shadow is lavender, and lilac, and at the farthest point, deep purple.

Here, two miles from the beholder, the Yellowstone River, blue as a summer sky, falls a distance of three hundred and fifty feet, over the gorgeous cliff, with the white mist rising, ever and always upward, like the prayer of a troubled soul, to the blue heavens above. It is too grand and wonderful for words to describe it, and none can ever judge of its wonders from any engraving or photograph in mere black and white.

Among the “impressionistic” elements of the painting are:

• There is no vantage where a person can see the Falls, The Grand Tetons, and geyser plumes simultaneously.

• It’s unclear who the small figures in the foreground are. Conjectures include Ferdinand Hayden, the head of the government expedition that Moran traveled with, and his executive officer, James Stevenson, or Moran himself and photographer William Henry Jackson, who was also on the expedition.

• And, not visible here, a slaughtered deer and native American with his back turned to the canyon.

—  The description of Moran’s painting is from The Ladies’ Repository: Universalist Monthly Magazine,1872.

— For more about Moran’s legacy, click “Thomas Moran” under the Catergories  Button.

— See this link for a discussion of Moran’s view of art and his obligation to reproduce nature.

One thought on “View: Thomas Moran Painted His Impression of the Grand Canyon of the Yellowstone”