The Army assigned Lieutenant Gustavus Doane to led an army escort for the famous Washburn expedition that explored the upper Yellowstone in 1870. Doane’s official report was one of several well-written accounts of the expedition, which thrust the wonders of the area into public awareness and helped get it declared a national park. Here’s Doane’s description of going to the bottom of Yellowstone Canyon. 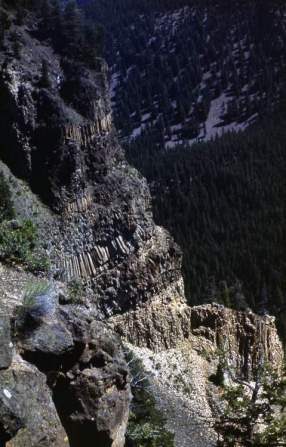 Selecting the channel of a small creek, and leaving the horses, I followed it down on foot, wading in the bed of the stream, which fell off at an angle about 30°, between walls of the gypsum. Private McConnell accompanied me. On entering the ravine, we came at once to hot springs of sulphur, sulphate of copper, alum, steam jets, &c., in endless variety, some of them of very peculiar form. One of them in particular, of sulphur, had built up a tall spire from the slope of the wall, standing out like an enormous horn, with hot water trickling down its sides. The creek ran on a bed of solid rock, in many places smooth and slippery, in other obstructed by masses of debris formed from the overhanging cliffs of the sulphereted limestone above.

After descending for three miles in the channel, we came to a sort of bench or terrace, the same one seen previously in following down the creek from our first camp in the basin. Here we found a large flock of mountain sheep, very tame, and greatly astonished, no doubt, at our sudden appearance. McConnell killed one and wounded another, whereupon the rest disappeared, clambering up the steep walls with a celerity truly astonishing. We were now 1,500 feet below the brink. From here the creek channel was more precipitous, and for a mile we climbed downward over masses of rock and fallen trees, splashing in warm water, ducking under cascades, and skirting close against sideling places to keep from falling into boiling caldrons in the channel.

After four hours of hard labor since leaving the horses, we finally reached the bottom of the gulf and the margin of the Yellowstone, famished with thirst, wet and exhausted. The river water here is quite warm and of a villainously alum and sulphurous taste. Its margin is lined with all kinds of chemical springs, some depositing craters of calcareous rock, others muddy, black, blue, slaty, or reddish water. The internal heat renders the atmosphere oppressive, though a strong breeze draws through the canyon. A frying sound comes constantly to the ear, mingled with the rush of the current. The place abounds with sickening and purgatorial smells.

We had come down the ravine at least four miles, and looking upward the fearful wall appeared to reach the sky. It was about 3 o’clock p.m., and stars could be distinctly seen, so much of the sunlight was cut off from entering the chasm. Tall pines on the extreme verge appeared the height of two or three feet. The canyon, as before said, was in two benches, with a plateau on either side, about half way down. This plateau, about a hundred yards in width, looked from below like a mere shelf against the wall; the total depth was not less than 2,500 feet, and more probably 3,000. There are perhaps other canons longer and deeper than this one, but surely none combining grandeur and immensity with peculiarity of formation and profusion of volcanic or chemical phenomena.

Returning to the summit, we were five hours reaching our horses, by which time darkness had set in, and we were without a trail, in the dense forest, having fallen timber to evade and treacherous marshes to cross on our way to camp. I knew the general direction, however, and took a straight course, using great caution in threading the marshes, wherein our horses sank in up to their bodies nevertheless. Fortune favored us, and we arrived in camp at 11 o’clock at night, wet and chilled to the bone.

— Image from the Coppermine Photo Gallery.

— For other tales from the Washburn Expedition, click on “Washburn” under the “Categories” button to the left.